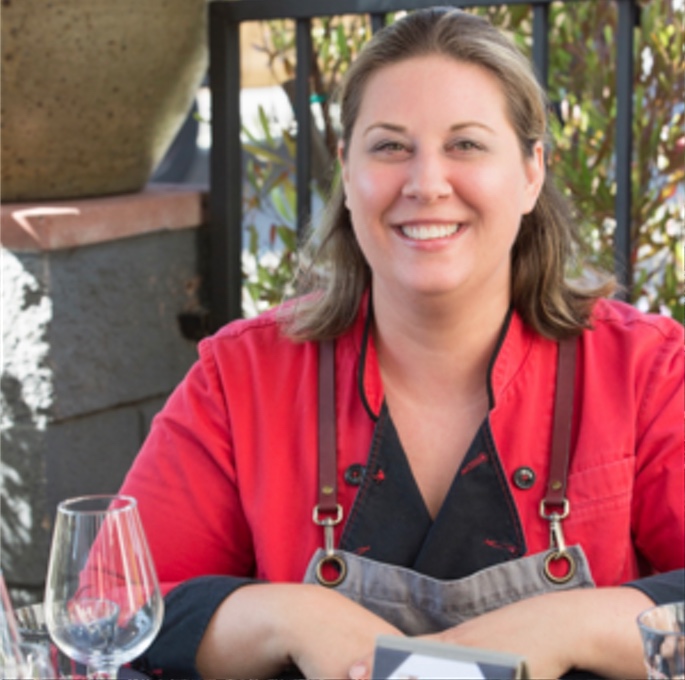 Born and raised in Laguna Beach, three sisters: Summer, Danielle, and Lindsay were all brought up by mother Vicki, father Michael, and stepfather Ken. Vicki, Michael and Ken were parents who raised their daughters to be health conscience vegetarians and they ended up with three independent, strong-willed, and successful daughters.

Among all her culinary mentors, Lindsay was first inspired by her Mother Vicki. It was Vicki's joy and passion for food that Chef Lindsay now embraces. While young, Lindsay didn't know the impact Vicki's influence would have on her career. Words like: raw, organic, vegetarian, gluten-free, dairy-free, vegan, and juicing, were an integral part in the Smith/Stern households. While those terms are commonly used today, they were rarely heard 20 years ago. Stepfather, Ken, taught Lindsay stability, financial responsibility, business sense, and to not forget to have fun in the process. His influence continues to this day. Her father, Michael, was a driving force promoting Lindsay to constantly keep high expectations of herself, the restaurant, and the individuals behind the restaurant. Michael's influence to always going above and beyond expectations, leaving things better than how you find them became the calling card of Nirvana Catering.

Lindsay enrolled in the culinary arts program at Orange Coast College at the age of 18. After her first experiences in the industry, she went to work (in catering) for Fox Studios, Universal Studios and Cienega Catering in Los Angeles, as well as in Orange County with Five Feet, Creme de la Cream, Sherman Gardens and Pascal Olhats. Chef Pascal hired Lindsay for her first kitchen position, a line cook. Working alongside the admired French Chef, Lindsay gained insight into what running a restaurant, market & specialty shop could be like. It was at this juncture that Lindsay accepted the most important job in her budding career - a position at The Ritz Carlton, Laguna Niguel.

She continued to fine-tune her skills in all aspects of the hospitality industry - working in the pastry and culinary kitchens. Lindsay went one step further, and learned the front of the house positions in the restaurant: namely event planning and reservations business. Now with her own restaurant, Chef Lindsay’s explorations take her to new heights, and she constantly gains knowledge of different culinary approaches, and techniques, both new & old - so the menu at Nirvana Grille changes not only with the seasons, but also with Chef Lindsay's culinary inspirations, executed with the help and support of her Nirvana family.

Chef Lindsay has two beautiful boys, Diego and Matteo. Both boys have grown up around Nirvana Grille, dining and spending time in the restaurant. Both boys love food! Why is our Kid's Menu such a hit? Because Chef Lindsay tests every recipe with Diego and Matteo. Matteo is sometimes found with more food on top of his head, than in his belly! Diego is quite the helper! At times he can be found visiting each table every night and asking guests what they like about their meal. He's putting all the information he's gathered into a notebook for Chef Lindsay's review! These boys will take over Nirvana Grille someday. In the meantime, watch out for Diego & Matteo.

Can't find the groceries that you are looking for? Check out our Co-Op and order online. All orders are for same-day delivery or pickup. Please add any additional information (exact time, food prep., etc.) in the notes section on the CART page before checkout.

Nirvana Grille Laguna Beach is available for both in-house and off-premises events. We have produced: Private Family Dining Events, Corporate Group Events, Charity Events both large and small. Contact our office to speak with someone about your special events: (949) 637-4708, or email us: events@nirvanagrille.com. We look forward to having your event be extraordinary!

Community Give Back Sunday

Over the last year we have developed an important ongoing fundraising program to contribute to the organizations that are important to YOU! Join us for dinner on any Sunday of the current month and we will donate 10% of your pre-tax food bill to the community organization of your choice: Your childrens’ school, your church, your local non-profit, or any cause that raises money to fund their programs that are not-for profit! At the end of every month, turn in your CCB card and we will write a check to your chosen organization on your behalf.