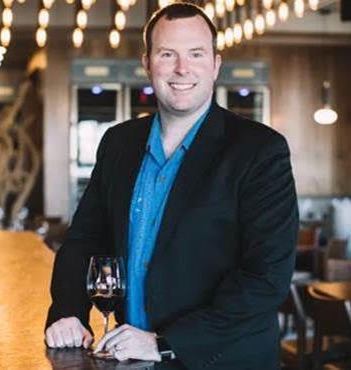 Meet Russ Bendel! Russ is the owner of Sapphire, Cellar. Craft. Cook. Russell J. Bendel Russ was born and raised in Philadelphia and relocated with his mother, father, and sister to California when he was a child. Russ grew up in the restaurant industry and always knew it was in his blood at an early age. He earned his Bachelor of Science degree from The Collins College at Cal Poly Pomona with an emphasis on Restaurants and Business Management. During that time, Russ worked with Bloomin Brands Restaurant Group for 15 years, six years with Outback Steakhouse and nine years with Fleming's Prime Steakhouse & Wine Bar. He was promoted to partner of the flagship Newport Beach location at the age of 25, youngest ever in company history.

During his time as a partner with Fleming's, he was proud to accomplish his Court of Master Sommeliers Certification, level five Wines of the World Certification, included in OC Metro's 40 Under 40 Annual Issue in 2012, and end his tenure with Fleming's as a Partner of the Year in 2010, 2011, and 2012. Russ decided to leave his role to peruse his own venture in February of 2013 with longtime friends and family. Russ acquired Vine Restaurant in San Clemente and has brought new life to a local's favorite, while doubling annual sales at Vine and capturing a handful of awards like OC Registers Top 10 Restaurants in OC in 2015. In 2016, Russ opened his second restaurant named Ironwood in Laguna Hills, designing the concept from scratch. Shortly after opening, Ironwood was named the Best New Restaurant in Orange County by the Golden Foodies in 2016 and business partner Gabe Whorley also was named Best Bartender of 2016 in Orange County. Both Vine Restaurant and Ironwood have also made it onto Brad Johnsons Top 75 places to eat in 2017. Russ and his partners opened a third concept called Olea in Newport Beach in 2017, another wine country inspired restaurant with a new look and design.

Russ enjoys spending time with his family and friends, especially with his wife Sarah, their daughter Brooklynn, and son Russell.

Russ is involved in the hospitality industry's California Restaurant Association Orange County Chapter and a board member for The Collin's College Alumni Association at Cal Poly. He enjoys donating his time to help support the growth of the industry and for future generations to come.

Sapphire, Cellar. Craft. Cook sits on one of the most historically significant pieces of commercial land in Laguna Beach. Nearly a century ago, it was the home of The Pottery Shack, which brothers Roy and Van Childs and their wives opened in 1937 with $80 worth of pots and vases. The Pottery Shack, whose original location in 1936 was in two old log cabins at the corner of Coast Highway and Anita Street, quickly became an internationally famous tourist attraction. It was one of several large pottery factories that flourished during the war years in Laguna Beach, and the only one to survive.

The history of the 37,500-square-foot property, with frontage on South Coast Highway and Brooks and Glenneyre Streets, goes back even further. A home originally stood on the site at 1200 S. Coast Highway, followed by a restaurant, the Yum-Yum Tea Room.

In 1972, after 36 years of operating the Pottery Shack, the Childs family sold the property to Pier One Imports, which had plans to use the property as a basis for national expansion. After those plans fizzled, the property passed back into private hands and, in 2004, the Pottery Shack – one of Laguna's favorite shopping venues – closed its retail store.

In 2006, after two years of caring renovation, "The Shack" was lovingly reborn as The Old Pottery Place. The collection of distinctive shops, food purveyors, and offices once again welcomed visitors from around the globe. The renovation was in compliance with the U.S. Secretary of Interior's specifications for historical structures and happened under the auspices of the Laguna Beach Heritage Committee. Many of the structures, materials, and features of the original site still can be seen both outside and inside the stores, shops, and offices.

In 2007, Sapphire Laguna Restaurant and Pantry opened on the property. Acclaimed chef-owner Azmin Ghahreman provided "global comfort food" in an inviting indoor-outdoor venue with a decidedly California vibe. In March 2020, the restaurant was rechristened Sapphire, Cellar. Craft. Cook after Gharreman sold the restaurant to Russ Bendel, a highly successful local restaurateur. The current landlord of the entire property, which consists of 15 separate parcels, is Joe Hanauer, an investor in commercial, office, medical, and residential real estate as well as real estate-related businesses.

An iconic statue of Eiler Larsen, the official "greeter" of Laguna Beach who used to welcome people near Main Beach, remains a prominent feature on the property -- a nod to its status as an iconic and beloved piece of Laguna Beach history.