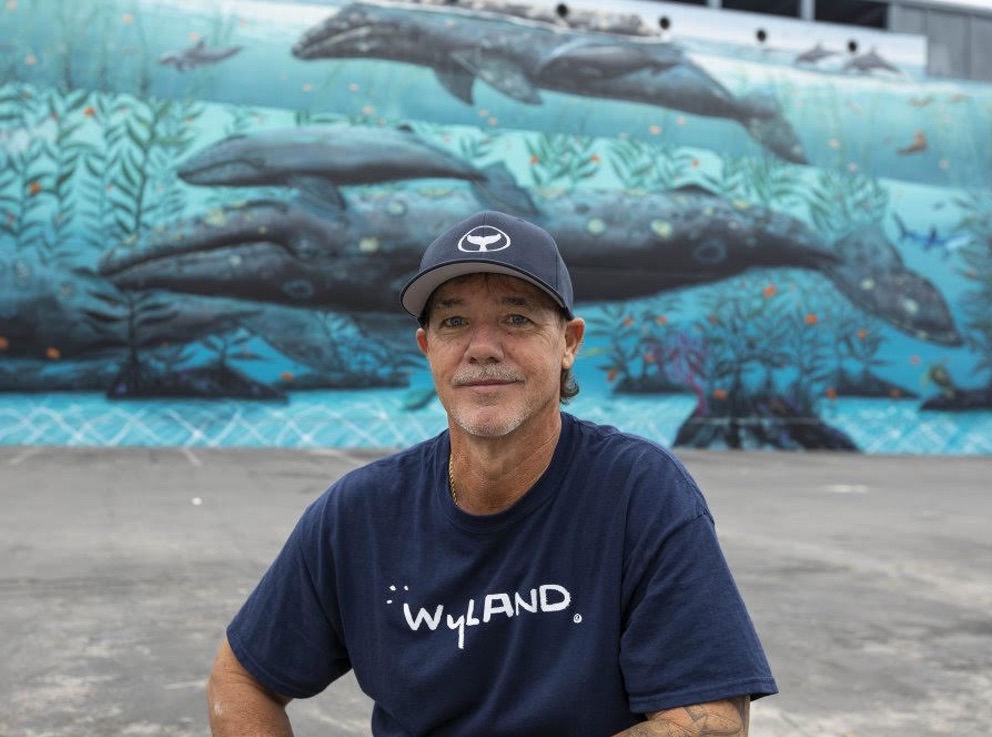 Wyland is an internationally renowned marine life artist, and one of the most celebrated and recognized artists of our time. An innovative painter, sculpture, writer, photographer, philanthropist, and filmmaker, he captured the imagination of people everywhere by completing over one hundred monumental marine life murals around the world from 1981-2008. The project, known as the Whaling Walls, remains one of the largest public arts projects in history and continues to be seen by an estimated one billion people each year.

An avid SCUBA diver and world traveler, the Detroit-born artist has been hailed a “Marine Michelangelo” by USA Today and recognized for his art and conservation efforts by the United Nations and on the floor of Congress. His giant ocean mural on the convention center in Long Beach, Calif., covering over 3 acres, landed him in the Guinness Book of World Records for the largest mural ever painted. Several years later in recognition of Earth Day, he doubled the size of that mural by completing the largest portrait of the earth on earth on the building’s three-acre roof — in only twenty-four hours. In fact, no artist in history has painted more surface area that today is now measured in acres.

His newest public art project, 100 Monumental Sculptures in 100 Great Cities around the world, includes plans to sculpt all the great whale species, as well as endangered and threatened animals from the IUCN Red List. Ten of these monumental sculptures will be underwater. “My art has always been about art and conservation,” Wyland says. “I was inspired in the early 70s by Green Peace, the first Earth Day, and from watching my hero Jacques Cousteau’s Undersea World television series. I was simply an artist in the right place at the right time in history, and I felt strongly that art could play an important role in bringing attention to environmental issues."

Wyland’s early inspiration grew upon seeing the ocean for the first time during a family visit to Laguna Beach, Calif., in 1971, when he was fourteen years old. The sight of a mother and baby gray whale migrating near the shore eventually inspired him to paint those same two whales on a life-size scale on an adjacent building in 1981. After the completion of the mural, he committed himself to creating one hundred ocean murals around the world as a gift to communities. He painted his 100th Whaling Wall mural in Beijing for the Cultural Olympics as the official artist for the US Olympic team. Today, Wyland art is collected in all fifty states and more than one hundred countries. He founded Wyland Galleries in 1978 with his first studio gallery in Laguna Beach where he lives today, and has influenced numerous traditional and street artists, including L.A.-based O.G. Slick. In 1993, he founded the non-profit Wyland Foundation as part of his continuing effort to inspire millions of people to take action to ensure clean water and a healthy planet through art, science, and conservation. The Wyland Foundation has partnered with the UN for the Wyland World Water Pledge to encourage all seven billion people to be water wise.

Today the artist is one of the most collected and appreciated artists in the world with artwork in museums, corporate collections, private homes and more than 100 countries.